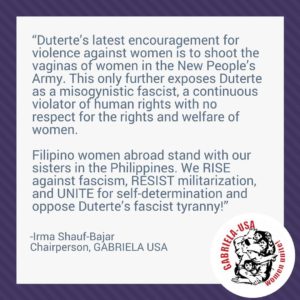 Members of GABRIELA USA denounce President Duterte’s fascist and violent misogynistic order to “shoot female rebels in their vagina.” Duterte said, “If there is no vagina, it would be useless,” implying that women are useless without their genitals. From the beginning of his presidency, Duterte has made several misogynistic comments towards women, including rape jokes which encourage the Armed Forces of the Philippines to commit violence against women and use rape as a tool of war. This is utterly reprehensible and must be condemned.

As GABRIELA USA, we must expose and oppose the U.S. backed fascist Duterte regime, that has killed over 13,000 Filipinos through the so called “war on drugs,” displaced more than 400,000 people in Mindanao because of martial law, and Duterte’s counterinsurgency program, “Oplan Kapayapaan,” that continues to target activists through killings, illegal arrests, and other human rights violations.

Duterte’s macho-fascist comments are violent and dangerous, as it will allow for not only his army but also encourages all men to continue to fuel violence against women. We must recognize that Duterte’s remarks on women stems from the Philippines’ feudal-patriarchal and imperialist structure. Duterte and the ruling class benefit from a system that abuses and exploits the majority of Filipinos, keeping them in poverty. This explains why many Filipinos, including women, join the New People’s Army, to engage in armed struggle for genuine liberation for the Filipino people.

GABRIELA USA calls on our family, friends, community, and allies to join us as we RISE against Duterte’s fascist regime, RESIST militarization of our homeland and bodies, and UNITE against the macho-fascist Duterte regime to oust him from office! We invite our community to join us on February 14th for One Billion Rising, a global campaign to end violence against women and on March 8th to commemorate International Working Women’s Day.

RISE against Fascism! RESIST Militarization! UNITE in solidarity for self determination!