LIFT UP FILIPINO WORKING WOMEN THIS MAY DAY

On May 1st, International Workers’ Day, GABRIELA USA highlights the rise of Filipino women workers and working women all over the world, organizing for livelihood, rights, and liberation. Workers continued to experience intensified hardship this year, as the COVID-19 pandemic continued to exacerbate the already existing economic crisis. Despite this, workers have valiantly fought back against cuts to jobs and wages, as well as worsening conditions in their workplaces and communities.

The struggle of workers today for better working conditions and rights is reminiscent of the militant battles fought by the working class in the United States 135 years ago, and which gave birth to International Workers Day. In 1884 capitalists used child labor and workers commonly labored for 10 to 16 hours a day, in unsafe conditions and without breaks. In the summer of 1884 labor organizers (many of whom were immigrant workers) called to begin a nationwide mass movement, starting on May 1, 1886, for an eight hour work day.

Two years later on May 1, 1886, more than 300,000 workers across the United States exercised their collective power and walked off their jobs as part of a national strike to demand an eight hour work day. Days later on May 3, a peaceful protest in Chicago turned violent when police attacked and killed picketing workers. The next day 176 police attacked and shot at 200 people,  killing four workers. Labor leaders were rounded up and arrested because of their political beliefs and their union organizing.

More than 100 years later, workers continue to face extreme exploitation and repression, and the labor movement continues the struggle. Filipino women workers put their lives on the line at their jobs everyday while they provide services to the public, making them vulnerable to contracting COVID-19 and running the risk of exposing their family members and others living in their household. In the U.S., Filipino healthcare workers bore the brunt of a failed, privatized healthcare system that neglected the need for adequate PPE, mass testing, and an overall plan to prevent the spread of the COVID-19 virus. A National Nurses United (NNU) report covering September – December 2020 revealed that at least 30% of nurses in the U.S. who died of COVID-19 related deaths were Filipino (approximately 74 of 245 nurses).

When lockdown measures lifted in the U.S., essential workers also found themselves in precarious conditions at work. Filipino women working in child development and daycare centers returned to work without adequate face masks, gloves, and little to no information regarding the COVID-19 vaccine. In Washington D.C., a group of Filipino women workers at a daycare center contracted COVID-19 once they returned to work and found that employers were not prepared for protocol measures. Massive cuts to education has resulted in cut hours and layoff at work, leaving many trying to file for unemployment compensation.

Meanwhile in the Philippines, state neglect in addressing the needs of working class families during the pandemic has led to women initiating community-driven efforts to provide for the most vulnerable through community pantries.

“The women organizing the community pantries back home are mostly housewives who stayed home during lockdown, but now their time is better spent helping their communities. A lot of young women are organizers of the community pantries. Organizers have been involved in other mutual aid efforts, food drives, etc. and take on other roles in being providers for their communities,” stated Pauline Jenny Non with Community Pantry PH.

Just like the women who organized the community pantries in the Philippines, Filipino women workers across the globe are organizing their communities and are collectively rising to fight against exploitation and repression. In response to the dire conditions of Filipino healthcare workers under COVID-19, GABRIELA USA organizations have united to take action in support of their demands for more protections, safe jobs, housing, healthcare and public health, and not militarization.

“On International Workers Day, we continue the fight for fair working conditions, for workers rights, and for those who have given up their lives for the struggle against exploitation,” said Irma Shauf-Bajar, GABRIELA USA Chairperson, “We continue the fight for liberation of our people and with workers of the world against exploitation and oppression!” 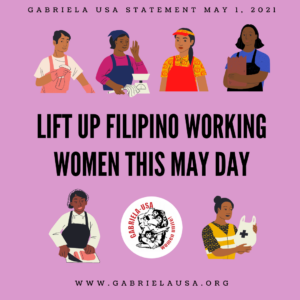 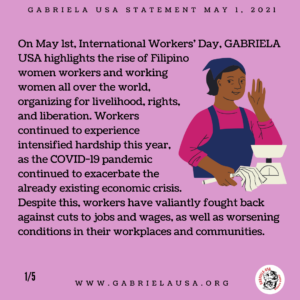 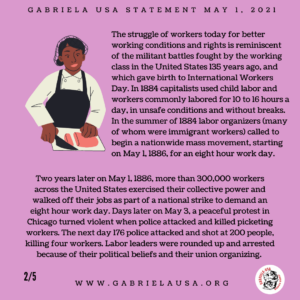 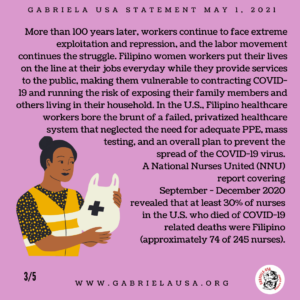 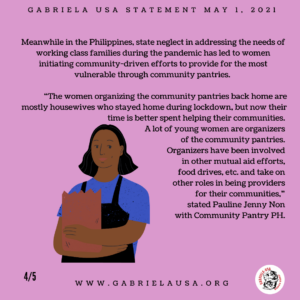 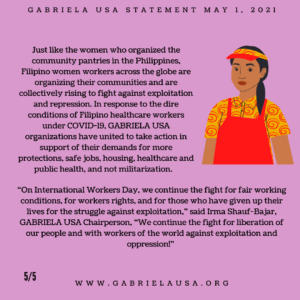 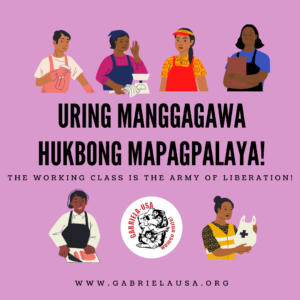 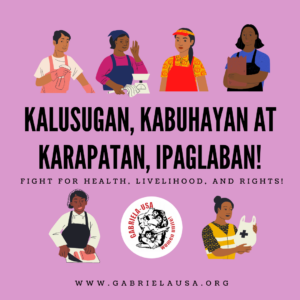 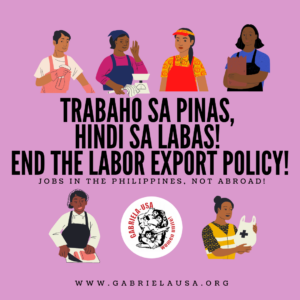 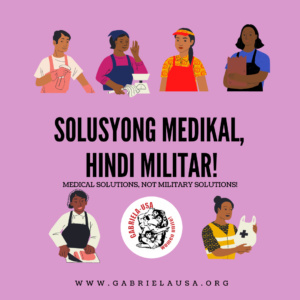 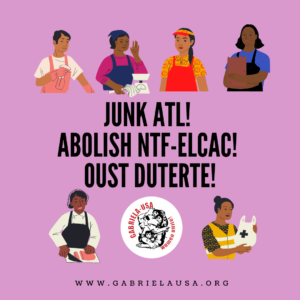