RESIST homophobia, transmisogyny and violence against women, RESIST US militarization, and UNITE for genuine liberation, safety, and self-determination!

Members of GABRIELA USA send our unwavering love, commitment, and support for LGBTQGNC+ rights on this pride weekend 2020. We affirm the important role of LGBTQGNC+ people in the struggle against gender-and sexuality-based violence, exploitation, and discrimination as well as the struggle against poverty, foreign intervention, and the ever-worsening global economic crisis. We raise our fists in solidarity and will continue to fight alongside trans, gender non conforming, and non-bianry people of color who have suffered at the hands of state violence, police brutality and the prison industrial complex, to U.S. militarization abroad.

We call on our Filipino people in the U.S. to join us to continue to fight and defend LGBTQGNC+ right to live in dignity, free from all forms of violence and repression.  The legacy of the Compton Cafeteria riot in San Francisco and  Stonewall Rebellion in NYC  is not over until all marginalized sectors of the Trans, Queer and GNC communty have justice, freedom and liberation.

We also urge everyone to stand with us in the urgent demand for the immediate release of 20 Pride Protestors from Bahaghari, GABRIELA, and other LGBTQ+ allies that were arrested in the Philippines this weekend on June 26, 2020.  The protesters were speaking out to demand free COVID testing, respect for LGBTQ+ people, and demanded an end to state-sponsored human rights violations, and the impending Anti-Terrorism Act. This fascist attack on the Pride 20 protestors is one example of why we need to resist Duterte’s repressive regime against freedom, democracy, and basic human rights.

Let us continue to RESIST homophobia, transmisogyny and violence against women, RESIST US militarization, and UNITE for genuine liberation, safety, and self-determination!

End Violence Against Trans, Gender Non-Conforming, and Non-Binary People! Justice for All Victims of Transphobia, Militarization, and State Violence! 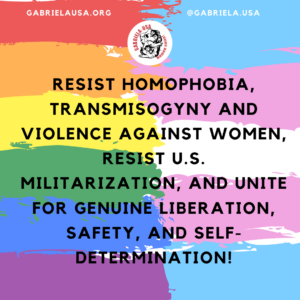 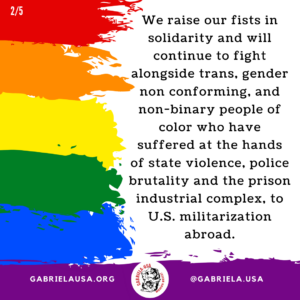 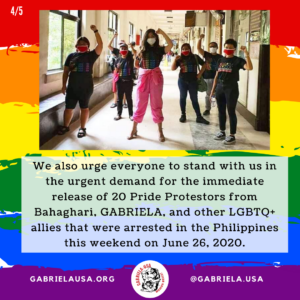 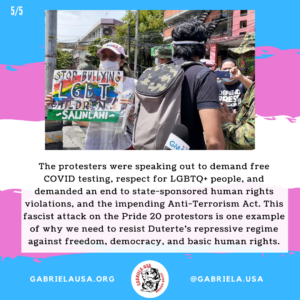 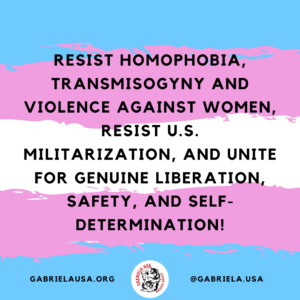 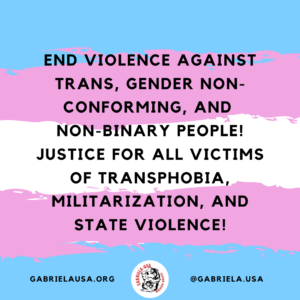 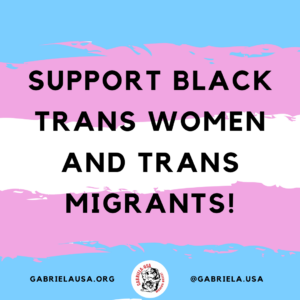