GABRIELA USA condemns the arrests of members of GABRIELA, Bahaghari and other LGBTQI+ advocates while commemorating International Pride Month in the Philippines!

Philippine National Police violently dispersed and arrested 20 people from GABRIELA Women’s Party, Bahaghari, Children’s Resource Center, and Salinlahi Alliance for Children’s Concerns while they were commemorating International Pride Month. Ten of the arrested are LGBTQI+ and were calling for free mass testing, non-discriminatory financial assistance for Filipinos affected by the pandemic and respect for rights of LGBTQI+.

Despite wearing face masks and practicing social distancing, police suddenly arrested the Pride 20 and gave no clear answers on what violation they had committed to warrant their arrest. Four Philippine National Police also manhandled a staff of GABRIELA Partylist and forcibly commandeered a civilian van, telling protesters they would be brought to the District Headquarters.

The arrests of the Pride 20 come under the intensifying facism and state terror under Duterte’s Anti-Terror Bill. The Anti-Terror Bill vaguely and broadly defines terrorism and gives the Duterte regime dangerous powers to suppress any form of dissent and to violate people’s civil rights. The arrest of the Pride 20 already demonstrates that people’s constitutionally protected rights, such as the people’s right to peacefully assemble will be violently repressed, even as the Anti-Terror Bill has not yet been signed into law. We can only expect that if the Anti Terror Bill becomes law, Duterte’s regime will unleash even more fascist and violent suppression against exploited and oppressed groups, like LGBTQI+ people.

We condemn the harassment, discrimination and illegal arrest of the Pride 20 at the hands of the Philippine National Police and the Duterte regime. Their actions continue to reflect the military “solutions” given at the expense of the human rights, health and livelihood of the Filipino people. We urge all who are in solidarity with the struggle against state violence, fascism, and U.S. Imperialism and who stand for human rights, LGBTQI+ rights, and the liberation of oppressed peoples to join actions against Duterte’s Anti-Terror Bill. 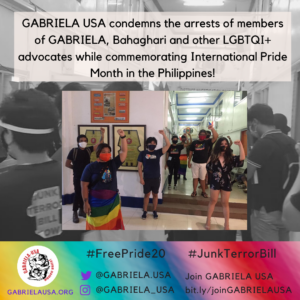 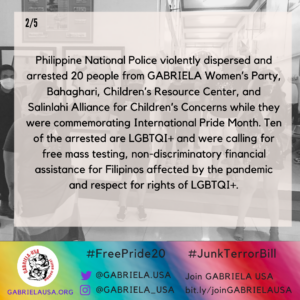 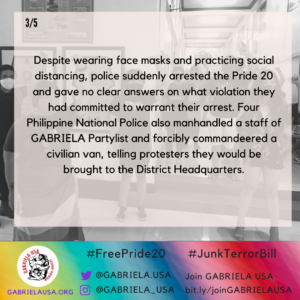 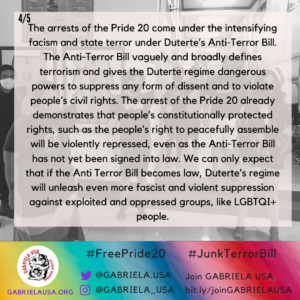 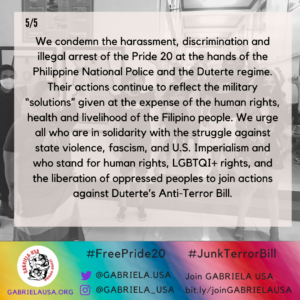 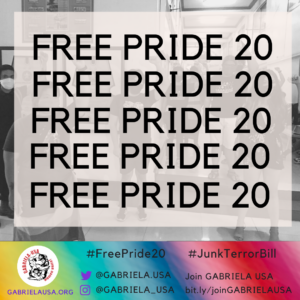 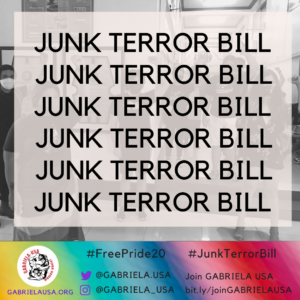 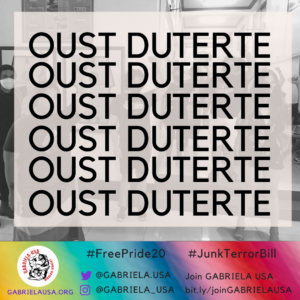 One Reply to “GABRIELA USA condemns the arrests of members of GABRIELA, Bahaghari and other LGBTQI+ advocates while commemorating International Pride Month in the Philippines!”