Working Women Rise From New York City to the Philippines

May 1st – In honor of the historical legacy of International Workers Day and the Haymarket Massacre where workers fought for the 8 hour work week, dozens of virtual participants joined from across the US and from the Philippines in GABRIELA USA and One Billion Rising’s virtual rally to RISE in solidarity for all workers –  health care workers, cruise ship workers, overseas workers, restaurant workers, grocery workers, agricultural workers, domestic workers, and other workers who call for safe working conditions, livelihood, health care, and affordable housing. The virtual action featured speakers directly from the Philippines, Monique Wilson, the Global Director of One Billion Rising and from the frontlines, Cris Hilo, Registered Nurse in New York City and GABRIELA New York Member. Women workers account for more than half of the working class and have played and continue to play an important role in contributing to the struggle of the working class.

During this historic time of global health crisis under COVID-19, people around the world are beginning to see the failings of an economic system that deprioritizes the health and well-being of the people. The devastating impacts of imperialism are largely felt by the working class, left to fend for themselves with a for-profit healthcare system, under-resourced hospitals, and slow response from government agencies, contributing to high infection and death ratios.

“We must expose the US and Philippine government’s inept and opportunistic responses to this public health crisis, which have favored market-driven and militarized responses—illustrating that the ultimate crisis is imperialism, which is at the root of the state’s inability to effectively and efficiently respond to the needs of the people,” stated Irma Shauf-Bajar, Chairperson of GABRIELA USA.

Monique Wilson spoke on the situation in the Philippines and similarities to the experience of women from over 200 countries who participate in One Billion Rising’s global movement to end violence against women and girls. Fascist governments like Duterte’s find ways to criminalize community efforts to respond to COVID-19, as in the case of the Marikina 10–a group of community volunteers, including a GABRIELA member, who were arrested while running a soup kitchen on May 1st. “Even when the city’s Mayor had stated that the arrested community volunteers should be released, the Philippine National Police (PNP), did not release them. We know that once one is in custody they can continue to bring trumped up charges against you,” Wilson said. “Despite that, we’re seeing all workers and communities finding ways to continue to express social solidarity and continue to organize and mobilize.”

In the epicenter of the COVID-19 pandemic in the US, Cris Hilo, who works as a nurse in Brooklyn–one of the hardest hit boroughs–brought the audience to tears. “If we did not continue to organize, we would not have seen a change in getting our equipment,” she said.  Hilo credited community actions in solidarity with the health care workers and stated, “We must continue to build a workers movement. We must continue to fight for a better society.” 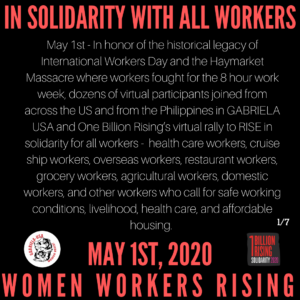 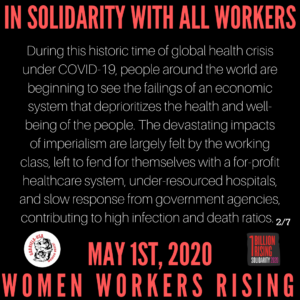 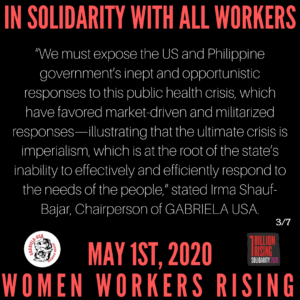 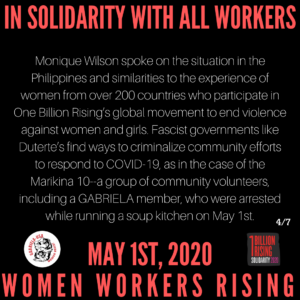 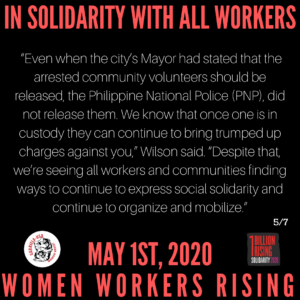 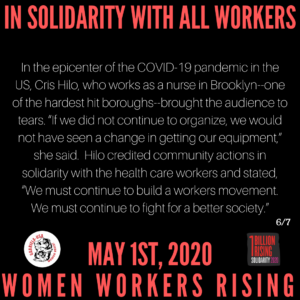 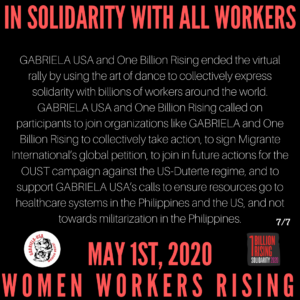 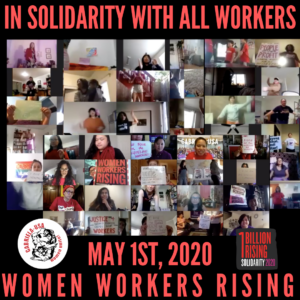