A WOMAN’S PLACE IS IN CHANGING THE WORLD!

GABRIELA USA’s members joined twenty-five thousand women in the Philippines and women around the globe to demand land, jobs, and rights on March 8, International Working Women’s Day (IWWD). From Palestine to Mexico, from India to Chile, women human rights defenders came out in full force on IWWD to demand their governments be held accountable for the ongoing violence against women and uphold their human rights. As GABRIELA USA, we marched in solidarity alongside working women, Trans and gender non conforming communities on March 8 around the world, and we will continue the call to defend Filipino women in the Philippines, in the US, and globally.

“The culminating activity shows our vision of Inang Bayan’s freedom from oppression. We face many challenges today but we will persevere until we realize a society where equality, social justice, and real democracy reign. As always, women will be part of making such society possible,” said Joms Salvador, Secretary General, GABRIELA, of their mass actions in the Philippines on IWWD.

Under Philippine President Duterte, Filipino women and their families continue to suffer job insecurity and unemployment, rising costs of basic goods and services, land grabbing and displacement. Due to Duterte’s anti-people economic policies,16 million FIlipino women are economically insecure and struggle to survive and meet the needs of their families. Duterte’s administration has failed to create jobs in the country, causing more than 6,000 Filipinos to migrate abroad everyday for work, majority of whom are women.

With the alarming number of human rights abuses perpetrated by an increasingly militarized state in the Philippines, GABRIELA USA members joined in solidarity with other women’s organizations across the US to oppose US militarism and the increased violence wrought against women, children, and their communities around the world with the presence of US troops. A month ago, the Philippine government sent a notice for termination of the Visiting Forces Agreement (VFA) to the United States. But since then, Duterte’s administration and the United States have been in talks to create a new defense agreement, similar to the VFA.

“Filipino women demand that the Duterte’s administration follow through not just with ending the VFA, but with terminating all unequal military agreements like the Mutual Defense Treaty and the Enhanced Defense Cooperation Agreement. These agreements allow US troops to commit rape and other violence against Filipina women and children with impunity, and the agreements violate the sovereignty of the Philippinse. There can be no substantial change until we end all unequal military agreements, and GABRIELA USA will continue to fight until we achieve that,” stated Irma Shauf-Bajar, Chairperson, GABRIELA USA.

GABRIELA USA will continue to build our collective resistance and power alongside our allies and comrades in the struggle against US intervention, with our sisters from Palestine, Brazil, and Ecuador. We link in struggle against the disappearance and repression of human rights activists in Mexico and Honduras. In the US, we rise alongside working class women and TGNC communities fighting for basic human rights, fair and affordable housing, and the end to state sanctioned violence by means of extrajudicial killings of working class women. We honor the thousands of women who boldly put their bodies on the line during the 1908 factory strike that led to the establishment of International Working Women’s Day and we are committed in continuing to build and advance the global anti-imperialist women’s movement!

WORKING WOMEN OF THE WORLD UNITE! 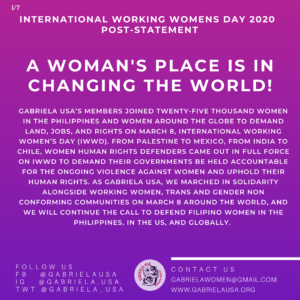 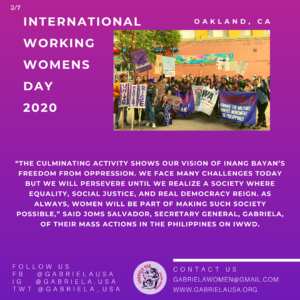 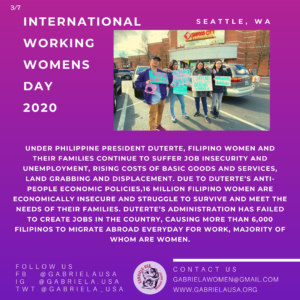 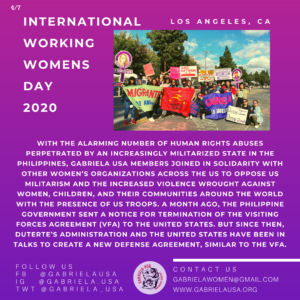 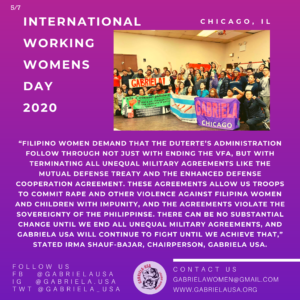 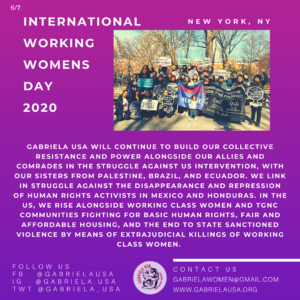 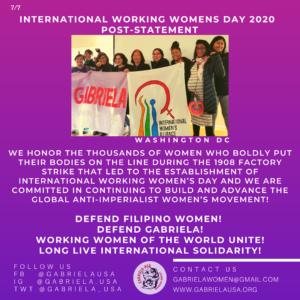