As Pilipino American History Month comes to a close in the U.S., alarming news about more heinous attacks on human rights defenders in the Philippines broke the news this morning. GABRIELA USA condemns these ongoing attacks under the Duterte government. 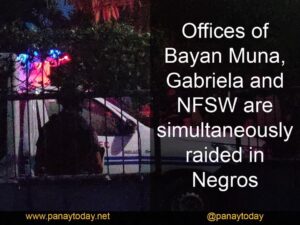 The offices of Bayan Muna Partylist, the National Federation of Sugar Workers (NFSW), and Gabriela in Bacolod, Negros Occidental were simultaneously raided in the dead of the night, along with the private residence of Bayan Muna Partylist’s Romulo Bito-on and his wife Mermalyn. In total, 62 people were arrested and are being branded as “communist rebels”, including 6 minors that the Philippine National Police (PNP) claims they “rescued” during the raid. During the invasion of the offices, state forces were carrying long firearms, which terrified and traumatized young children who were present at Gabriela’s office.

Several firearms and grenades were reportedly “recovered,” and among those arrested at the Gabriela office was Anne Krueger of the newly established alternative media outfit Paghimutad, which has been covering social issues, including extrajudicial killings and other human rights abuses.

These raids come on the heels of the illegal arrest of Cora Agovida, the Metro Manila chairperson of Gabriela, and her husband Mickael Tan Bartolome of the urban poor group Kadamay earlier that day. The PNP claims that a .45 caliber pistol and two grenades were seized from their home during the arrest. 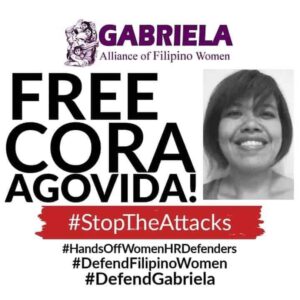 These arrests were conducted right before a three day holiday weekend in the Philippines, clearly a tactic to bar due process since the courts will be closed and legal support for all the victims of the arrests will be delayed.

Nobody is safe from Duterte’s tyranny. Activists, journalists, progressive legislators, farmers, and even children are all targets of repression. Evidence is planted, legal organizations are branded as communist fronts, and workplaces and homes of civilians are forcefully invaded. This onslaught of intimidation and attacks is a part of the all-out crackdown on human rights defenders and government critics  under Duterte’s Oplan Kapanatagan (Operation Stability).

As Piipino American History month concludes, let us best celebrate by honoring the Filipino people’s long history of resistance to foreign invasion, occupation, colonial rule, dictatorship, and authoritarianism. This resistance continues under the executive abuse of power by the Duterte government to silence its critics and eliminate our hard-won democracy. Let us call for an end to the state crackdown on those who speak out against tyranny and repression, against extrajudicial killings and abuse of power in the halls of Malacanang.

With the Philippines as the largest recipient of US military aid in the Asia-Pacific region, GABRIELA USA calls on its members and supporters in the US to join us in the campaign to stop the flow of US tax dollars to the Philippine government that are linked to these state-sponsored human rights abuses.

GABRIELA USA plans to mobilize in actions jointly with BAYAN USA starting on Sunday November 3rd and we urge all organizations and individuals to join us in indignation against the fascist Duterte regime and in solidarity with all human rights defenders in the Philippines!