GABRIELA USA condemns the assault and harassment of GABRIELA USA and BAYAN USA members by the hosts and participants of the Mindanao Indigenous Peoples Council of Elders (MIPCEL) Duterte backed tour in the US. Concerned Filipinos and allies disrupted the MIPCEL event in Arlington, Virginia to expose the truth that the Armed Forces of the Philippines (AFP) and Duterte government are primarily responsible for the mass killings and displacement of Lumad people, and these touring “leaders” are in fact members of the AFP, paramilitary forces, are Lumad sell outs and have become traitors to the Lumad communities they claim to represent.

On July 22nd, 50 concerned Filipinos and allies from around the US participated in the direct action to protest the lies presented by the representatives of the MIPCEL Duterte backed tour. Protesters walked into the event venue with taped mouths and holding signs. The MIPCEL representatives and attendees reacted violently, and physically assaulted several protestors including grabbing two women’s breasts. Protesters removed their taped mouths and chanted “AFP-MIPCEL, STOP LUMAD KILLINGS! SAVE OUR SCHOOLS!” This comes a week after protesters, including GABRIELA members, were aggressively grabbed and physically dragged out of the MIPCEL Duterte backed tour stop at the Los Angeles consulate on July 15th.

GABRIELA USA members have consistently participated in integrations with Lumad communities and the Lumad community schools. Children’s access to education is a human right and an important pillar in any community, especially for the Lumad whose ancestral lands are constantly threatened by the presence of foreign mining corporations, the AFP, and paramilitary groups like ALAMARA who are responsible for the series of deaths of Lumad people and Lumad leaders. It is important for Lumad community schools like Alcadev, MISFI Academy, and the Salugpungan Ta’ Tanu Igkanogon Community Learning Centers to teach literacy to their students, especially as groups like MIPCEL serve as contract negotiators between indigenous tribes and private business, deceiving Lumad into signing away ancestral land.

GABRIELA USA condemns these attacks on our women who have put their bodies on the line to expose and oppose the MIPCEL as agents of the AFP and traitors to the lumad communities whose schools are occupied and shut down by military forces and by the Duterte government’s Department of Education. We continue to support the Lumad community schools like Alcadev, MISFI Academy, Salugpungan Ta’ Tanu Igkanogon Community Learning Centers, their communities, students, and teachers.

AFP-MIPCEL OUT OF LUMAD COMMUNITIES! 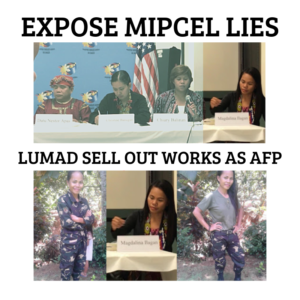 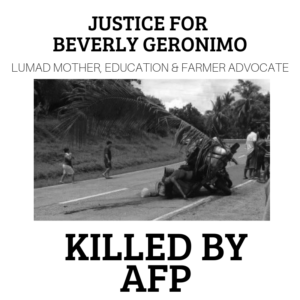 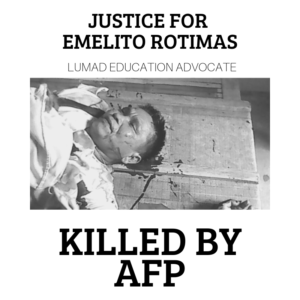 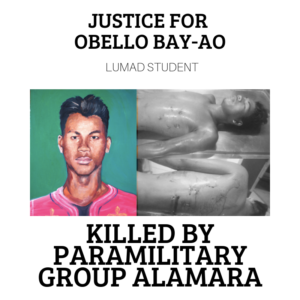