GABRIELA USA demands the ousting of President Rodrigo Duterte because of his abhorrent remarks on the rape of Overseas Filipino Workers(OFWs). Since the beginning of his presidency, he has made it clear that he does not respect the rights and bodies of women. His words and actions have ranged from kissing a woman without her consent on television, telling soldiers of the Armed Forces of the Philippines they may rape women, instructing AFP soldiers to shoot women fighters of the New People’s Army in the vagina, and going as far as to blame women and their beauty for rape.

“Duterte’s recent remarks on the rape of OFWs show an attitude that is inimical to the welfare and lives of Filipino migrant women workers,” GABRIELA Philippines posted on their Facebook page, “He blatantly disregards the reasons why his countrymen opt to work abroad: extreme poverty and lack of job opportunities in the country, which he fails to address. How can OFW women now expect the Philippine government to protect and defend them from rape and sexual abuse in host countries when the President himself has already justified rape as a cultural practice?”

Although Duterte assumed his presidency on the platform of being for the people and promising to help OFWs, his administration has been noticeably absent in advocating for OFW women like Mary Jane Veloso who was implicated in a drug trafficking case in Indonesia and put on death row. International outcry and strong organizing efforts by National Democratic organizations won a reprieve from Veloso getting executed, yet she remains imprisoned on death row in Indonesia, separated from her son.

The Duterte Regime continues to pass policies that only intensify the struggle of poor and working Filipinos who are forced to migrate to provide for their families. Examples include Duterte’s TRAIN law which exacerbates the chronic contractualization leaving workers with low wages and no benefits, in the face of rising prices of basic needs like food and housing. The Build Build Build program hires contractors from outside the Philippines rather than employing people actively searching for jobs within the country.

Duterte’s bloody drug war results in OFW mothers–who went abroad to support their children–coming home to their children in coffins.

“It’s been two years too long, with thousands of lives brutally killed under this presidency,” said Shauf-Bajar. “A president who engages in and permits violence against women, is no president at all. The women and workers of the Philippines deserve better and GABRIELA USA calls for the ousting of President Rodrigo Duterte.” 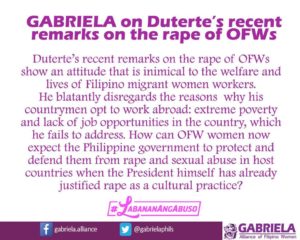