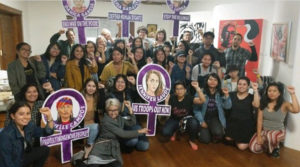 Jennifer Laude, 26-year-old Filipina trans woman murdered by US Marine Joseph Scott Pemberton in Olongapo, Philippines, drew international attention to the unpopular occupation of the United States military and the epidemic of violence against women in the Philippines.

In the ensuing fight for justice for Jennifer Laude, GABRIELA USA exposes and condemns the Visiting Forces Agreement (VFA), a military pact that governs the entry and presence of American troops in Philippine territory. As seen in the case of Laude, the VFA works to grant US troops immunity from prosecution under Philippine law, enforce unequal relations between the US and Philippines, trample on Philippine sovereignty, and expand militarization to the detriment of human rights.

“We must rise against fascism, resist militarization, and unite for self-determination, especially in the face of deepening dictatorship under Duterte, whose fascist rule is funded directly by Trump’s pro-war, pro-occupation administration and $184.5 million in U.S. tax dollars,” says Irma Shauf-Bajar, Chairperson of GABRIELA USA. “The mass protests following Jennifer Laude’s brutal death and the high profile attempts by the United States military to circumvent the Philippine legal infrastructure on behalf of her murderer, Pemberton, are a reminder that the Filipino people, including Filipinos in the United States, must continue to fight tyranny, its foreign backers, and vile policies that allow for US occupation like the VFA.”

During the screenings, GABRIELA USA chapters held panel discussions to reflect on the film, Jennifer’s life, and justice for her murder as it relates to the roles the US government and Duterte’s dictatorship play in perpetuating violence in the Philippines. 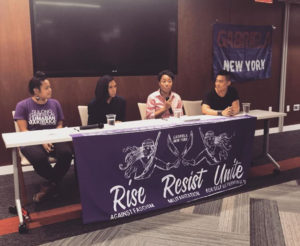 Community Screening in New York City followed by panel discussion with director, PJ Raval
“It hurts still to think about Jennifer Laude, the rage and thought that she and many other Jennifers aren’t coming back to us,” said Jill Mangaliman, Gabriela Seattle member, after watching Call Her Ganda at the GABRIELA USA community screening. “We remember her murder at the hands of U.S corporal Scott Pemberton, her death which galvanized a movement for justice, for Trans rights, and to end the VFA and all forms of US imperialism in the Philippines. My heart breaks every time i see your face, sister Jennifer, but I remain determined.”

GABRIELA USA will continue to sponsor Call Her Ganda screenings and community forums nationwide to commemorate Jennifer Laude and demand for her justice. We invite our community to join us in fighting for Jennifer. 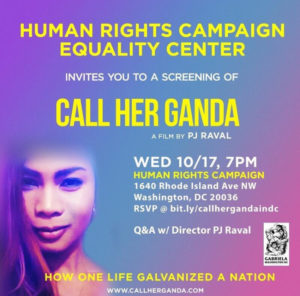