In remembering Martial Law under Marcos’ regime, GABRIELA Washington, D.C. remembers the role of women in the struggle for national democracy. During Marcos’ regime, women were arrested, tortured, and killed, especially student activists, peasant women, urban poor women, and women who chose to rise against fascism and tyranny. Today women in the Philippines and in the U.S. continue to rise, resist, and unite against Duterte’s fascist dictatorship.

Under his current regime women’s political, social, economic, and cultural rights have consistently been violated and women remain under attack. In the countryside women farmers and their families fear losing their lands, which are being threatened by state military that are supported by U.S. military assistance to the Philippines. In the urban area, women workers with the Nagkakaisang Manggagawa ng Nutriasia Marilao experienced violent dispersals as the company’s management is backed by Philippine National police (PNP). Women have also lost their children and spouses in the Duterte’s War on Drugs, or Oplan Tokhang. Additionally, with the high inflation in the economy and the increase of prices of basic commodities, women and families are feeling the burden of the tax reform, or TRAIN, laws being implemented under Duterte. These are some of the overall impacts of Duterte’s repressive regime on women.

Duterte’s ongoing remarks regarding women, especially his recent jokes about rape, continue to dehumanize women. As quoted in the recent New York Time article he stated, “They said there are many rape cases in Davao,” the president said. “As long as there are many beautiful women, there will be more rape cases.” These remarks are blatant attacks on our women, and further create a culture of impunity and excuse perpetrators committing such crimes, and only to encourage violence against women. Duterte has only put more women in danger with his remarks and attitude, because they further reinforce a feudal-patriarchal culture in Philippine society. When attacks on women become part of mainstream life, it affirms systemic oppression of women and children, making us and our communities more vulnerable to exploitation and abuse in our home country and abroad.

With these conditions and attacks and as GABRIELA women, we say ENOUGH IS ENOUGH! We stand with MALAYA Movement and our communities represented here today in Washington, D.C. to resist and bring down this repressive, macho-fascist regime! We affirm our commitment to organize and mobilize for national democracy, and true liberation of our women, of all Filipinos, and our motherland. 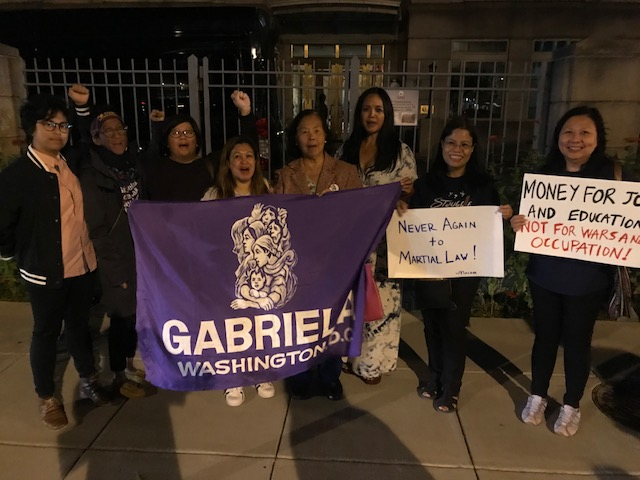