GABRIELA USA is in solidarity with survivors speaking out against Supreme Court nominee Brett Kavanaugh. This week Dr. Christine Blasey Ford faces the accused Supreme Court nominee Kavanaugh to testify under oath before the Senate Judiciary Committee of the United States. Kavanaugh faces allegations of sexual misconduct including accusations of attempted rape and repeated sexual assault. As Filipino women with the most anti-women and macho-fascist president in Philippine History, we unite against macho-fascism through the #BabaeAko #LalabanAko (tagalog for I Am Woman, I Will Fight) campaign. We support all oppressed women and their communities who resist the continuing macho-fascist regimes of Duterte and Trump, which includes their cronies who allow their anti-people, anti-women, and fascist policies to continue. We urge women and all people to RISE, RESIST, and UNITE against macho-fascists Duterte and Trump, and against those like Kavanaugh who serve to uphold the macho-fascists in power. 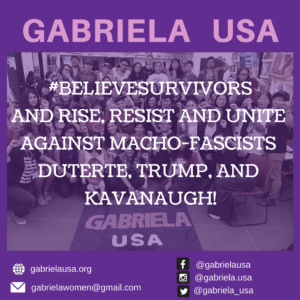 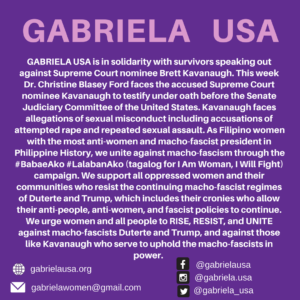