Like a thief in the night, the Philippine government insidiously dismantled and covertly removed a bronze statue facing Manila Bay on Roxas Boulevard, effectively removing one of the rare monuments that symbolized and honored the Filipino WWII “Comfort Women,” affectionately called “Lolas.” More than 400,000 women and girls across the Pacific, from Korea, China, Indonesia, and the Philippines, were forced into sex camps and violently made to serve as sex slaves for the Japanese Imperial Army during WWII.

GABRIELA USA strongly condemns the removal of the “Comfort Woman” statue, a memorial that was established due to the hard-fought struggle of women’s rights advocates, historians, and activists. The Philippine government workers claimed in Kyodo News that the memorial was removed so that pipes could be laid underground and claimed that they would return the monument afterward, which is dubious considering the government did not inform any of the stakeholders of the statue’s removal. And yet, according to the Japanese Embassy in Manila, the Philippine government had notified the embassy of its intention to remove the statue that was erected in December 2017. The embassy had protested the statue and demanded it be taken down since its erection, and Foreign Affairs Secretary, Alan Cayetano, said in The Japan Times: “The Philippines cannot strengthen its relationship with Japan if it keeps inflaming a matter that is considered ‘settled.'” This response from Cayetano is factually false and incorrect on all accounts: to this day, the Japanese government has not sincerely or legally issued an official apology to the “Comfort Women,” and the Lolas of the Philippines never received official reparations for their suffering during WWII. 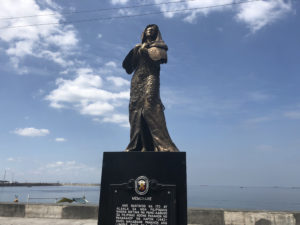 Below is a testament from a GABRIELA Oakland member, Melissa R. Sipin:

When I visited the moving monument last month in March, I was taken by the statue’s representation of Filipina strength and resilience. The seven-feet bronze sculpture depicted a blindfolded woman in Maria Clara traditional Filipiniana gown in mourning. And yet, standing against the Manila Bay with her head held high, facing the city toward the Japanese Embassy down the road, her strength and resilience was embodied in her fierce stance.

The inscription beneath her read: “This monument is a reminder of the Filipino women who were victims of abuses during the occupation of the Japanese forces from 1942-1945. It took a while before they came out into the open to tell their stories.”

One of those women, the wife of Major Diego Sipin of the joint Philippine-American army in Northern Luzon, was my own paternal grandmother, my adoptive mother. My grandmother and her sister were held against their own wills in a garrison in Agoo, La Union, where the war first broke out in the Philippines on the Lingayen Gulf. My grandmother was held over six months and gave birth in captivity. She unfortunately died with this secret, and I did not learn of her suffering until her funeral, when my grand aunts came forward during the processional and professed what happened to her and their other sister, who also passed away without ever receiving compensation from the Japanese government.

The Philippine government’s removal of the Comfort Woman statue without informing any of the the human rights groups who have fought valiantly to defend the Lolas’ dignity and right to justice, reiterates their complete erasure of what happened to the “Comfort Women” and what happens to countless women during times of war and conflict. Members of GABRIELA USA condemn this violent erasure and constant attack against women and our human rights.