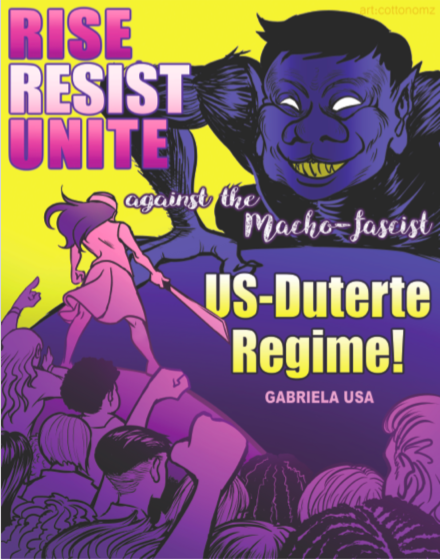 On the 110th Anniversary of International Working Women’s Day, GABRIELA USA honors the working women of the world. We recognize the impact and effort of working women who sacrifice daily for their families, their children, and for themselves to survive in a system that continually exploits and oppresses working women of color and TGNC people. In the Philippines’ semi-feudal and semi-colonial society and culture that inherits these ideals, Filipino women are made to exist as secondary. Filipino women are bound twice in a nation struggling for freedom, from the cities to the countryside in the Philippines and abroad, Filipino women are unbound as they commit themselves to the struggle and RISE against fascism, RESIST militarization and UNITE for self-determination.

It is clear the U.S.-Duterte regime is the enemy of the people, as it upholds the system that continues to deepen the suffering of the Filipino people, women and children. It is macho-fascist President Duterte and imperialist puppeteer U.S. President Trump, whose orders and actions have revealed their insidious anti-women, anti-people policies. We cannot accept a future dictated by the U.S.-Duterte regime and must resist their macho-fascist attacks on the people.

GABRIELA USA recognizes the Amazonas, women freedom fighters, who have rejected the system given and who sacrifice their lives daily to fight and build a society of a new-type. We recognize the OFWs, Overseas Filipino Workers, a majority of whom are Filipino women who sacrifice seeing their families and children grow because they are pushed overseas to survive. We recognize the Filipino women, TGNC people, and those in solidarity who have decided to be on the people’s side of history and answer the call to RISE against fascism, RESIST militarization and UNITE for self-determination.