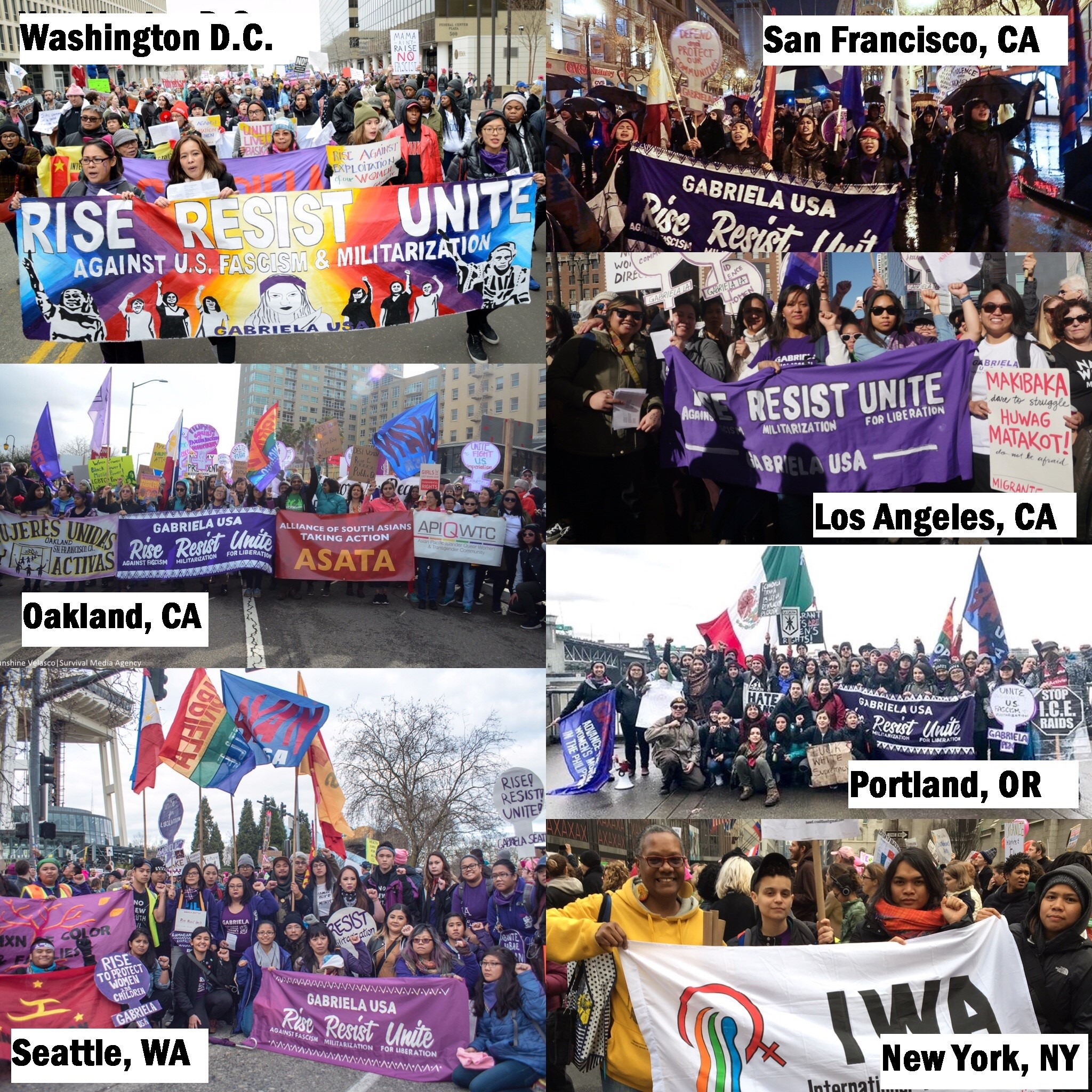 On January 21st, GABRIELA USA mobilized with millions of people across the nation in the Women’s March, the biggest one-day protest in U.S. history, and raised their collective voice under the banner of RISE, RESIST, UNITE. In Los Angeles, Seattle, Portland, San Francisco, Oakland, San Jose, New York, Chicago, and Washington D.C, GABRIELA USA members alongside allies took to the streets with power and grit in protest of Trump, reminding the world that “Women Hold up Half the Sky.”

Trump’s presidency and the rise of neo-fascism in the U.S. is an effect of the crisis of the current capitalist system and neoliberal policies, which puts people’s rights and welfare secondary to what will create profit. Trump and his administration have proposed plans to cut healthcare, specifically to cut funds that go to women’s reproductive health and plans to eliminate all Department of Justice grants – amounting to nearly 500 million dollars – that support cases of violence against women. GABRIELA USA recognizes that it is low-income women of color, immigrant women workers, Trans and Gender non-conforming people and our children that will bear the brunt of the harm that these policies inflict.

Trump’s administration will continue to fuel the crisis of a global imperialist system and its effect on countries around the world — poverty, hunger, homelessness, gentrification, militarization, state-sponsored violence, unemployment, and lack of access to basic necessities such as clean water, food, shelter, education, and healthcare. Trump has already signed an executive order that reinstates a federal ban on U.S. funding for international health organizations that counsel women on family planning options whose work is associated with abortion in any way.

“Unity is the only way forward and will be our protection for one another in resisting a Trump presidency. We must not be fooled and lose sight of the real enemy that wants to divide us here at home, and blind us from what it is doing to the people in other countries. We must Rise, Resist, Unite!” said Chairperson Irma Shauf-Bajar at the Women’s March in Oakland.

GABRIELA USA will continue to organize in our communities and stands in solidarity with our allies to fight against U.S. imperialism, fascism, and the current capitalist system. GABRIELA USA urges all people to join an organization and continue to take action beyond this weekend’s protests.

RISE against Fascism, RESIST Militarization, and UNITE for Liberation!